Mr. O’Donnell received his undergraduate degree with distinction in 1976 from the University of Virginia, where he was an Atlantic Coast Conference Honor Roll student athlete. Mr. O’Donnell received his law degree from the University of Virginia in 1980. He then served as a law clerk to the Virginia Supreme Court. A promised position with the Department of Interior Solicitors Honors Program and an interest in mountain climbing led Mr. O’Donnell to Alaska in 1982.

Mr. O’Donnell has received the highest “A-V” rating from Martindale-Hubbell, the oldest and most respected attorney peer-review organization. Mr. O’Donnell is also listed in Best Lawyers in America. That organization states that it “compiles lists of outstanding attorneys by conducting exhaustive peer-review surveys in which thousands of leading lawyers confidentially evaluate their professional peers” and that “a listing in Best Lawyers is widely regarded within the legal profession as a signal honor.” Neil O’Donnell has also been selected as an Alaska Super Lawyer. Mr. O’Donnell is also a Proctor Member of the Maritime Law Association, the highest and most distinguished level of membership in that organization.

In 2015 Mr. O’Donnell received the honor of being one of the few Alaska attorneys to be inducted as a Fellow in the American College of Trial Lawyers. “The American College of Trial Lawyers, founded in 1950, recognizes the very best trial lawyers from the United States and Canada. The College’s Fellows are chosen strictly by invitation and only after a rigorous and lengthy investigation. The candidate must be identified as a highly skilled trial lawyer in the opinion of judges and practitioners, and as a person whose ethics, moral standards and collegiality are above reproach. Fellowship is limited to one percent of the lawyers in any individual State or Province, and the candidate must have practiced for at least 15 years.”

Mr. O’Donnell is a member of the Alaska and Virginia Bar Associations, and is admitted to practice before state and federal courts in Alaska and Virginia, several federal circuit courts of appeals, and the United States Supreme Court. Mr. O’Donnell is an active member of several Alaska Bar Association committees. He is a past president of the Mountaineering Club of Alaska. 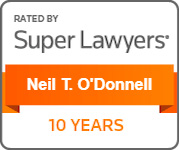